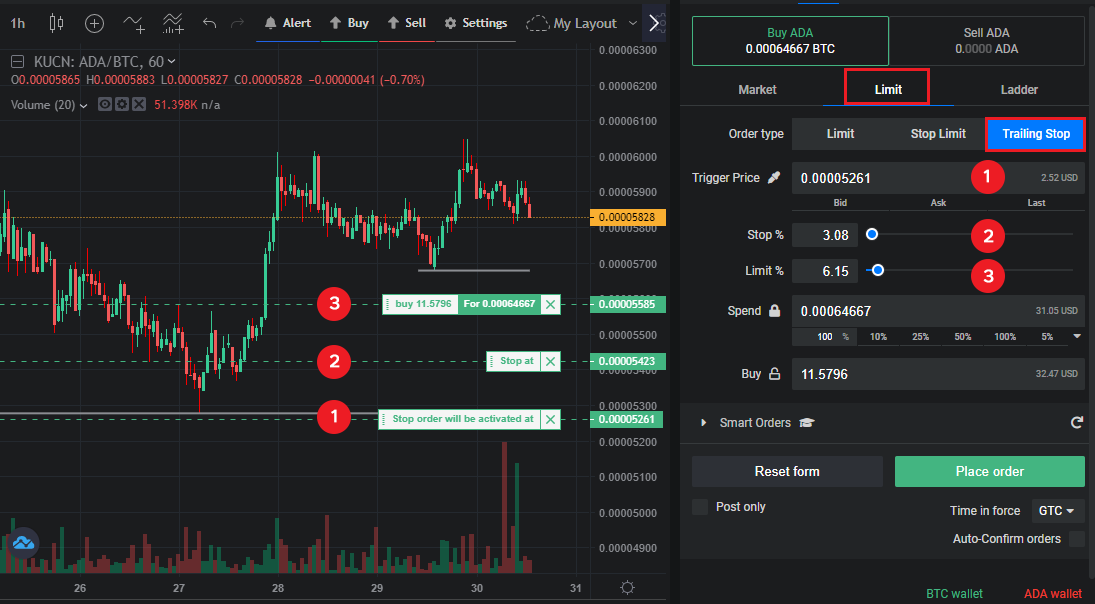 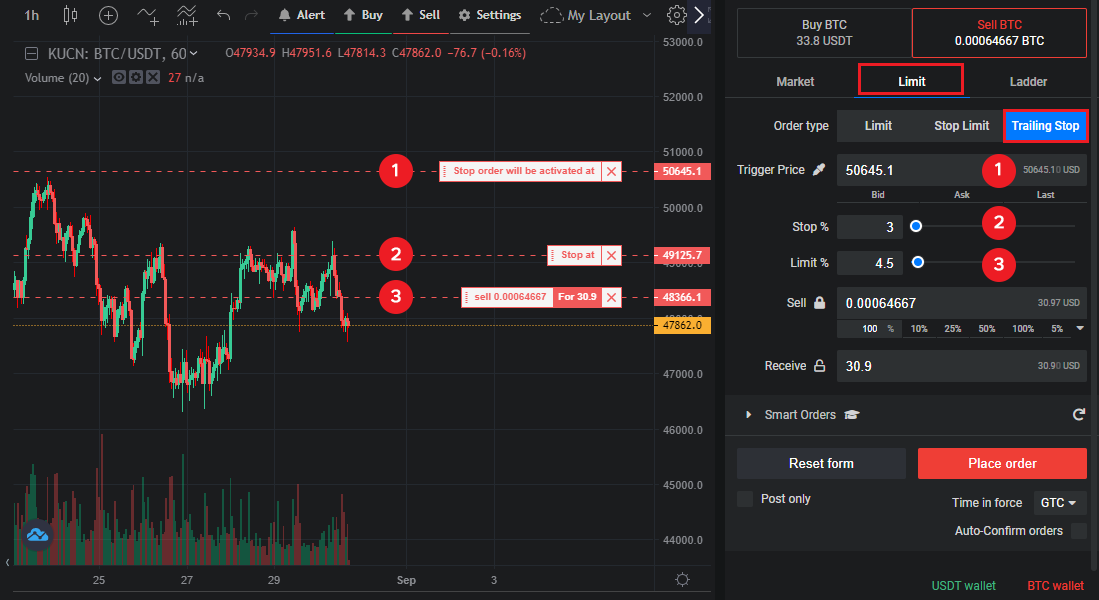 1. Trigger price Also known as the Activation price. The price at which the order will be activated and begin to track or trail the market price as it moves.There are three ways to enter the trigger price:select a price from the chart by clicking the Eyedropper icon (Price-picker) then clicking on the chart at the desired price.Type a priceThere are three preset options for setting the Trigger Price: Bid: Use the highest Bid (Buy) price in the Order Book (OB) Ask: Use the lowest Ask (Sell) price in the OB Last: Use the last traded price from the Trades list2. Stop %Initially, the Stop percentage will be the percentage distance of the Stop price from the Trigger price. Once the trigger price is reached, the Stop price will trail the market price by the Stop percentage. The stop price can only move in one direction—for a TSL buy, it can only move down. And for a TSL sell, it can only move up. To enter the Stop percentage either:Type a percentage amount,drag the slider,or drag the Stop price handle bar on the chart.3. Limit %For a Limit TSL, the Limit percentage is the distance from the market price to place the order, once the Stop price has been reached. The Limit percentage will usually be a bit larger than the Stop percentage, e.g. Stop % = 5%, Limit % = 6%.If your Stop percentage is very close to the Stop percentage, in a fast moving market there is a chance that the current price will already have passed your Limit Price by the time the order is placed. The greater the difference between the Stop % and Limit %, the more similar the order becomes to a Stop Market order. E.g. Stop % = 5%, Limit % = 10%. The Limit price is likely to be worse then the best Ask and Bid prices, and the order will be filled at the best available prices in the Order Book—just as a Market Order would be.To enter the Limit percentage either:• Type a percentage amount• drag the slider • or drag the Stop price handle bar on the chart.Order Execution and Error CodesThis is the sequence of events for a TSL SELL order once it has been placed: For a TSL BUY order, the logic is the same but it works in the reverse.Example Trailing Buy with pricesWe expect the price to go down and want to buy at the best price we can.For this trade on AAA/USDT, the current price is 10.00 and we will use:Trigger Price: 9.00Stop %: 5%Limit %: 6.5% Optimisation: Choosing ValuesThe values to choose for a Trailing Stop will depend on the goal of the trade.The flow above shows the importance of choosing an appropriate distance between the Trigger Price and the Stop Price (stop%). If you leave too little room (as an extreme example, 0.01%), the current price might have passed the stop order before it is placed resulting in an error from the exchange (Error: Order would be placed immediately"). If you leave too much room (as an extreme example 20%) you might not get the profits you were hoping for, especially if the price starts retracing very soon after the Trigger price was reached.  Zooming in a bit more on the separate percentages of the stop and limit order: When the percentage of the stop order is for example 2.0% and the percentage of the limit order is 2.01%, when the stop is triggered there’s a real chance of the price having already moved below 2.01% and as a result the order won’t be filled. So it is up to the trader to find out what the right percentage is for the trade you want to make. Using a large difference between the Stop and Limit percentages will effectively result in a Market Order—i.e. the best price/s in the OB will be used to fill the whole order. If the order is large, this can result in large slippage, especially in a thin OB (the same as for a market order). A small difference could result in the order being placed in the OB and not being filled at all until the price retraces again.Trigger PriceUse the current price if the price has already started moving in the desired direction and the trend has begun.If the price move hasn’t yet started, you will likely want to choose a trigger price some distance from the current price. For example, if the price has been moving in a sideways channel and you believe that a move above the channel = a breakout, then you could place the Sell trigger price just above the channel. Likewise for a Trailing Stop Buy Entry, the trigger could be set just below the bottom of a channel.Another option is to place the trigger just above resistance or below support.Stop Price PercentageA small Stop % is usually used with lower time-frame charts, when trying to capture small, quick price moves.A larger Stop % is used for swing and position trading, when trading higher time frame charts and trying to capture bigger price moves.Using the ChartOne way to choose a Stop percentage is to make some measurements on the chart of the relevant market. The goal is determine how much the price retraces while still trending in the desired direction. The chart above shows three percentage measurements made of the three largest retracements during the most recent uptrend. To measure these, the Measure Tool on the left side of the chart can be used. To attach your measurements to the exact top and bottom of wicks, turn on the Magnet option. 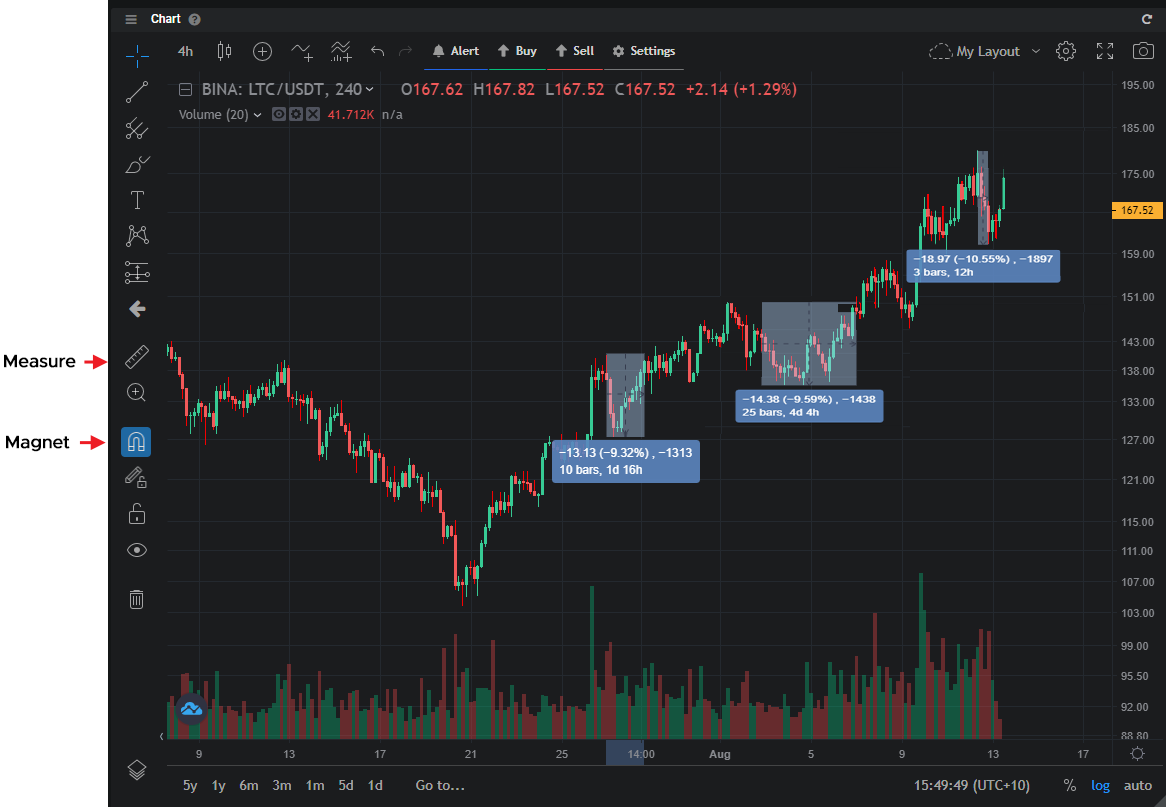 The retraces on the chart above were between 9 and 11%. So a Stop percentage would need to be greater than 11% to avoid being stopped out. 13% or even 15% would give a fair amount of leeway. Of course those percentages are also “given back” when the trend does reverse. I.e. your trade is executed 13-15% below (for a sell) or above (for a buy) the best price. This is why larger percentages are only used with longer time frame positions with the expectation of larger moves. For day trading a lower time frame chart would be used and smaller retraces would be expected (as part of larger trends).Limit Price PercentageIn most cases, a trader will want to execute a market order when the Stop price is reached. To do this, use a Limit percentage that is larger than the Stop percentageE.g.Stop = 1% Limit >= 1.5%Stop = 5% Limit >= 7%Stop = 15% Limit >= 20%If you are concerned about slippage and only want to buy or sell close to your Stop price, you can use a limit price that is more similar to the Stop price. The risk is, if the price is moving quickly when the Stop Price is reached and the Limit order placed, the price might have moved beyond your order and the order will sit in the OB until the price retraces to that level.____________________________________________New version 4th September, 2021

Was this article helpful?