Articles on: Signals and Automation 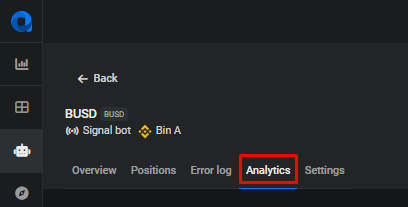 Signal Bot analytics are divided into Sessions. Each time the bot settings are changed and saved, a new session is started. This allows for comparing strategies and settings.

Choosing a Report Period or Session to view

Select a Report period, enter a custom date range or select a Session from the dropdown menu. When ALL is selected as the Reporting period, the data from all Signal Bot sessions for this bot are combined and summarised.To go back to all sessions after viewing an individual session, choose ALL from the Report Period options.

The top section provides summary results for one or more selected grid bot sessions or the selected date range. Allocated Amount: The amount currently allocated for this signal bot. It includes all entries specified in the settings and is multiplied by the maximum number of positions allowed. It represents the total amount the bot could invest.Realised PnL: The amount of profit the bot has made from closed positions.Closed Positions: The number of positions opened and closed during the period. With the number won and lost.Win Rate: The percentage of wins, out of the total positions Closed.Open Positions: The number of positions currently open.Open Position Investments: The amount invested in the positions that are currently open.Unrealised PnL: The PnL of the unsold coins in currently open positions, valued at the current price.Available Funds: The Allocated Amount less the amount invested in open positions.

This table provides a summary of the results for all session for this bot.Sessions: The number and start date of the session.Positions: The number of Closed positions for the session, with the number of positions won and lost.% of total: Win rate %: The number of profitable positions expressed as a percentage of the total closed positions for the sessionAvg. PnL %: The average PnL made on each position, including winners and losers. Average PnL: The average amount of profit or loss made on each position, including winners and losersTotal PnL: The total amount of profit or loss made during the sessionTotal PnL %: The percentage this session contributed to the overall total profit or loss for the bot. This column should sum to 100%. If the sum of the Total PnL column is less than zero, the percentage column will show how much each session contributed to that loss.

The three charts show how your PnL balance has changed over the period. Mouseover (or tap) on the line or bar to see details for that day.Cumulative PnL represents the daily balance after the previous day’s PnL has been addedDaily PnL shows the amount of PnL for each day.Closed Positions shows the average PnL per closed position per day. This chart makes it very easy to see which sessions had losing positions, and the percentage loss. 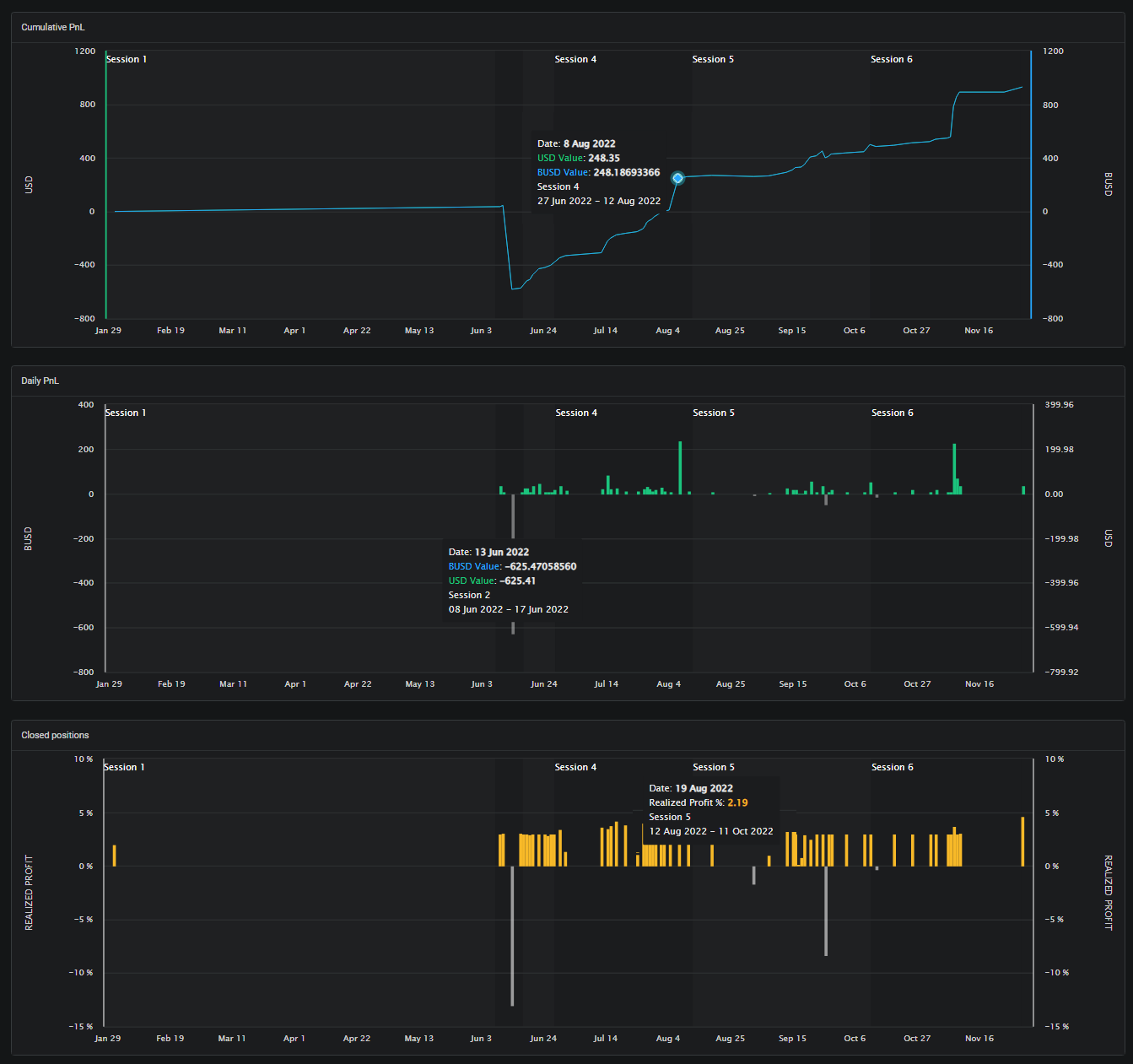 These three tables show PnL broken down by different categories.

DCA Breakdown divides your closed positions into those that had none, 1, 2, 3 or more DCAs filled or partially filled. In addition, if any positions have been converted to Manual (from My Positions), that are included in a separate category. Comparing the win rate for each category can be useful in assessing profitability. However, there can be reasons for losses that are also worth considering before changing strategy. Also, if you changed DCA amounts or percentages at different times, it’s more useful to view this data by session than for ALL time.

The Volume table slices your positions into volume categories, shown on the left side.

The Markets breakdown table lists the markets for each of your closed bot positions.This can be a long list, and can be scrolled when the mouse is on the table. Alternatively, click on the table and use Page Up/Down or Arrow Up/Down keys to scroll the table.This table is sorted by Total PnL. Markets with larger position sizes, more positions, and positive PnL are likely to be near the top of the list.

The top table on the right side provides further summary data about the positions closed during the selected time frame.Values are given in 1. quote currency 2. fiat currencyTotal Volume: The total quote currency amount for all Buy and Sell orders executed.Fees paid: The total value of fees paid for executed trades. Note that rebates that are applied after a trade occurs are not available from exchanges (e.g. Kucoin).Runtime: The time that the selected period coversAverage PnL: The average profit or loss made across all positions.Average Win: The average profit of the winning positionsAverage Loss: The average loss of the losing positionsAverage Duration: The average duration of all closed positionsAverage Position Size: The average position size of all closed positions, including all filled entries.

The second table on the right side provides a breakdown of details about the signals received by the bot. Note that signals that don’t meet the bot’s minimum price or minimum volume settings are filtered out earlier, so these are not reported.Signals Received: The sum of the number of signals received where a position was opened and closed, and signals where a position was not opened.Positions Opened: The number of positions opened and closed. Positions still open are not included in this count.Positions Not Opened: A total of the positions not opened due to the errors listed below. The details appear in the Error Log.The percentages for Positions Opened and Positions Not Opened should sum to 100%. 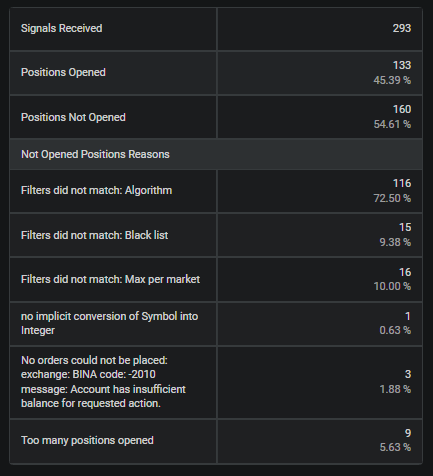 In this table are statistics on each of the filters or other “errors” as reported in the Error Log (see image above).The list will vary depending on the errors your bot has received.Note that Signals that were received and where a position was opened but not filled (usually due to an Entry Expiry setting) are not yet reported here.The subtotals in this list add up to the count for Positions Not Opened. And the percentages are based on the total number of Positions not Opened.

How to use the Signal Bot Analytics

Compare results for different settingsCompare results over time, and correlate with market performance or BTC priceInvestigate the losing positions in detail: how many DCAs and TPs (from the Bot Position list), Volume category, SL (from Bot Positions), were any mistakes made in settings or manual takeover, did more than one position make a loss on the same day (and if so, how to avoid that in future), would you have been better off using a Stop Loss or not.Note that the Bot Positions list can be sorted by the PnL amount and PnL %, so it’s easy to find the losing positions. Check past page one if you have more than 100 positions in the list.If you have further questions, please contact our Customer Service, linked at the bottom of this page.

Was this article helpful?